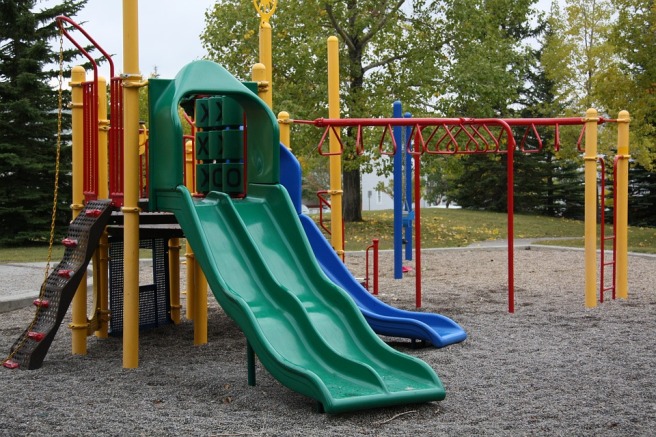 Ah, yes—playgrounds. Definitely the forum we all had in mind for presenting such a divisive Establishment Clause issue to the Supreme Court. Let’s figure out how we got here.

Missouri has a clause in its state constitution, commonly known as a Blaine Amendment, which forbids the allocation of public funds to any church, religious organization/figure, or religious school/university. Additionally, it prohibits the donation of real estate and personal property by the state. It does not consider whether or not the funding would be used for a secular purpose.

In 1875, Representative James G. Blaine proposed an amendment to the U.S. Constitution with the goal of taking the Establishment Clause a step further. Specifically, the amendment sought to prohibit state funds from going to religious schools. Many believe the Anti-Catholicism movement and other nativist sentiments motivated this, as the Catholic Church taught many immigrant children.

The amendment failed, but many states still passed their own Blaine Amendments for similar reasons. Ultimately, these once questionable motives have seemingly transformed into arguments over protecting the separation of church and state. Currently, thirty-five states have Blaine Amendments in their state constitutions. After Trinity Lutheran, however, the future of these amendments is likely to be called into question.

The Trinity Lutheran conflict arose from Missouri’s denial of state funding for scrap tire surface material for a playground. Missouri’s rationale for its decision was based solely on the fact that Trinity Lutheran Church was a religious institution. The state relied on its Blaine Amendment, which explicitly prohibits “aid[ing] any church.”

The Supreme Court rejected this argument and ruled that Missouri had violated the Free Exercise Clause. The Court had previously held that laws denying “an otherwise available benefit because of religious status are unconstitutional.” However, “neutral” and “generally applicable” laws can be upheld despite some unintentional interference with religion.

States do not need to explicitly inhibit an organization’s ability to practice religion to violate the Free Exercise Clause. Rather, more discrete forms of discrimination with “laws that burden religious practice” are also analyzed under strict scrutiny, which requires that a law “further a ‘compelling governmental interest’” but also be “narrowly tailored.”

Here, the church was not allowed to “compete for a benefit that is otherwise available to all secular organizations.” The Blaine Amendment based classifications on religious affiliation and denied an “otherwise eligible organization” the opportunity to apply for funding. This constituted a discriminatory policy, and Missouri’s interest in utilizing measures beyond the Establishment Clause to avert any divergence was not a “sufficiently compelling interest.”

It would appear to be a pretty clear decision. However, footnote 3 complicates matters. There, the Court said, “[w]e do not address religious uses of funding or other forms of discrimination.” With this footnote, the Court limited its holding to the particular facts of the case and refused to address the overarching issue.

The most telling part of the opinion was that four justices did not join in footnote 3, and among them, their different approaches were striking. On one hand, Justice Thomas and Justice Gorsuch concurred in part, agreeing with the opinion overall but differing on two points.

First, they rejected the idea of a “distinction . . . drawn between laws that discriminate on the basis of religious status and religious use.” They concluded that this was an unworkable and unstable approach, and that the distinction would “blur[] in much the same way the line between acts and omissions can blur.”

Additionally, they questioned why the Free Exercise Clause was even at issue. The government cannot “force people to choose between participation in a public program and their right to free exercise of religion.” So, it did not matter if we defined something as a status or use because “it is free exercise either way.”

Their second contention was their disagreement with footnote 3. While it was “entirely correct” in their opinion, they rejected the inference that this was limiting the holding of the case. They suggested their cases are “governed by general principles, rather than ad hoc improvisations”—meaning, “the general principles here do not permit discrimination against religious exercise—whether on the playground or anywhere else.”

Justice Sotomayor and Justice Ginsburg’s dissent, however, suggested this limitation “does not resolve this case”—that this was not just about “resurfac[ing] a playground,” but the “relationship . . . between church and state.” Despite footnote 3’s limitation, they argued that the Court held “that the Constitution required the government to provide public funds directly to a church.”

The dissent contended that the Court misunderstood the facts, breaking away from precedent and history, finding this obligation “for the first time.” This decision therefore “weak[ens] this country’s longstanding commitment to a separation of church and state beneficial to both.” The dissent was worried about the implications of this case in the future, possibly being the first step in dismantling the Establishment Clause.

They also highlighted that public funding of religious institutions, while previously upheld, has only been granted when used for secular purposes. Here, there were no such “assurances” by the church—to the contrary, it was clear that Trinity Lutheran used the playground “in conjunction with its religious mission.” The Establishment Clause would certainly bar Missouri from funding this project.

Also, the Court had always upheld distinctions based on “religious ‘status’” if the “interest in the Religion Clauses” justified them. According to the dissent, Missouri’s Blaine Amendment did just that.

This leaves us with no clear answer on what the future is for Blaine Amendments or the relationship between the Establishment and Free Exercise Clauses. Depending on the makeup of the Court, there could be a new approach to the separation of church and state.

Could the policy preferences of a majority of the states be invalidated with the more deferential approach that disfavors any “discrimination” toward religion? Or could the logic of the Blaine Amendments prevail, creating an even stricter division between the two?